Have you been in uncharted territory on your own and before you know it, you are in over your head and a giant parrot tries to land on your kid’s face? No? So I am the only one then?

Unfortunately this attraction is closed. But still it’s a great story!

Have you ever been told to wait at a tourist attraction, but your anticipation and curiosity got the better of you and you just couldn’t take it anymore?

You decide to venture into uncharted territory on your own and before you know it, you are in over your head and a giant parrot tries to land on your kid’s face??

No?  That hasn’t happened to you? So I am the only one then? We began our journey outside this giant Vancouver Island World Parrot Refuge with exotic birds squawking away inside taunting us to come in and play.

We were supposed to wait for someone to take us in and show us around, but just couldn’t take it anymore. Peeking in windows and doors can only last so long when dealing with young kids.

Okay who am I kidding? It was me who wanted to see inside and couldn’t wait any longer!

The girls in our family were actually happy to never go inside. Apparently having a plethora of loud exotic and overly friendly birds flying around your head can be unnerving for some. Go figure.

My two boys cautiously followed me through the front doors and instantly we were amazed and shocked all at the same time. As we were taking in the sheer number of exotic birds, one little guy landed right on my shoulder! I don’t know what I was expecting, but I didn’t expect that at all! The boys loved the up close encounter with this cute little guy as we passed him around and enjoyed the moment together.

My plan of sneaking ahead of our bird sanctuary tour guide was just to look at the first section… but then I saw a second door and convinced the whole family to join me. I just couldn’t resist going a little bit further.

I was lured in by these birds I tell ya! I opened the second door and what lay before me may as well as been a thousand parrots! Who knew you could come to Vancouver Island and literally be flanked by hundreds of parrots!?

Thankfully for us all, these hundreds of birds in this portion of the World Parrot Refuge were behind a fence and could be enjoyed at a distance.

I don’t know what would have happened if that fence wasn’t there and they all tried to land on my shoulder! As you can tell from the picture this is the real deal World Parrot Refuge for exotic birds, not an elaborate tourist exhibit with a beautifully manicured tropical rainforest inside. These hundreds of poor exotic birds have all been abandoned by their previous owners.

The colours on these birds were astounding. Their long, majestic, rainbow tails and feathers on their bodies were fun to look at.

Even though there were hundreds of these birds, they all looked just slightly different from one another. I guess that shouldn’t be hard to believe since there are billions of people on this planet and we all look different. Did you know, parrots live about 85 years?  Every single bird at the World Parrot Refuge has been rescued from people who realize they cannot care for the bird any longer.  Most parrots outlive their owners and are not wanted by the surviving relatives.

Off in the distance, yet other one of those doors was just calling me to open it.

How I ended up this far into the world parrot refuge building without waiting for our guide is beyond me, but I was in too far to turn back now.

This time when we opened the door, instead of seeing exotic birds in cages they were all loose!

Before I knew it I had this GIGANTIC parrot swoop down out of nowhere and plop down right on my shoulder! This wasn’t like that little itty bitty bird I encountered after the first door I opened.

This parrot had a beak on him the size of my fist, eyes like large marbles and claws! I darted my head around and I was starring at this parrot inches from my face!

I was startled at first wondering if this was normal or if I was going to get in trouble, but the parrot seemed comfortable… a little too comfortable.

This gigantic blue bird just spoke! It blew my mind! In all the excitement, I forgot that parrots can talk.

My kids loved watching my reaction and started giggling. What came next shocked us all even further, if you can believe it.

I finally got my wits about me and realized this was going to make for an awesome picture and needed a photographer quick! I somehow persuaded Gretta to come through this third mystery bird door and urged her to continue our adventure.

Gretta cautiously grabbed the camera from me and raised her two hands to take a picture and BAM! Out of nowhere a bird landed on her arm!

(Apparently her raised arm looked like a branch I was told later by one of the staff. Those are the helpful things you are told about if you wait for a staff person to orient you, I was told later…)

Gretta screeched and there we were with a gigantic bird now on me, on Gretta and I am still yelling at her to take a picture!

Yes, I was yelling.

Hundreds of parrots squawking in unison makes for a very loud environment and I was a tad excited.

With all this commotion, we must have caught the attention of the other exotic birds from across the room, because sure enough a few of them took flight and came to join the party on my kids’ shoulders! Just as the boys and I were starting to relax and interact with the birds, one did unfortunately fly a little too close to my youngest’s face and gave him a pretty good scratch. His glees of overwhelming joy quickly ended and led him to tears and a pronouncement that he “hated this place and never wanted to come back”.

He came back 5 minutes later.

At that moment the staff person who was scheduled to show us around the World Parrot Refuge arrived.

Suffice it say, we must have been quite the spectacle.

Later we found out that these were of course the most friendly of all the birds in the Parrot Sanctuary.  With all of these exotic birds being previous pets, they were all very accustomed to landing on humans and saying “hello”.

Literally. Just another piece of info the helpful staff would have told me if I had waited… ha!

How about you? What’s your exotic bird experience? Comment below and start the ball rolling!

• Don’t let the small doublewide trailer by the World Parrot Refuge sign fool you! For years I thought this little building was the World Parrot Refuge. I was unimpressed and never bothered to stop because I figured there were 10 parrots in there or something. For some reason I never saw the massive warehouse in the back housing over 900 exotic birds! But you do purchase your tickets at the trailer which doubles as a thrift store believe it or not.

• You may want to bring ear plugs as the sound of over 900 birds can be a bit deafening! 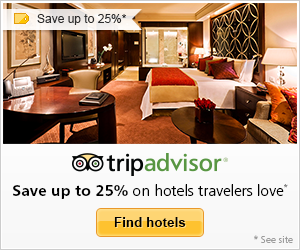 • Did you know that the trade in wild birds is so highly lucrative, it is 2nd only to drug trafficking worldwide.  And only 20% of the birds caught in the wild survive long enough to get to the market. You can help curve this illegal trafficking by not buying exotic birds.

• Word to the wise: keep your kids heads guarded just to be on the safe side when going into the room with the more friendly and larger exotic birds flying around. Seriously.

While our experience at the World Parrot Refuge was complimentary, you can rest assured that our thoughts, opinions, and findings are our own as always.